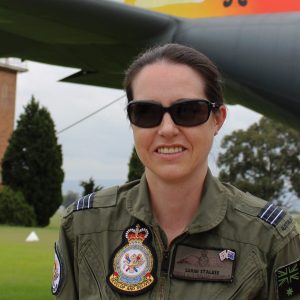 A career within the Royal Australian Air Force (RAAF) offers many opportunities for women to undertake various roles such as Pilot, Engineer, Logistics, Administration, Security, Education, Air Traffic Control, Doctor and other allied health roles.   All roles within Air Force are open to women with equal pay and equal opportunities.

In January 2014, women represented 18% of the entire Air Force team and only 7% of aviation roles. The RAAF has been working hard to increase this number.

The Graduate Pilot Scheme (GPS) has been introduced to attract women to become Air Force pilots. This scheme is currently available for women studying a Bachelor of Aviation Degree through Griffith University in Queensland.

SQNLDR Sarah Stalker has been serving her country since joining the Royal Australian Air Force Navigator program in March 2000.

For almost 15 years SQNLDR Stalker has served various missions in areas such as the Middle East, East Timor, Sumatra, Afghanistan and Iraq.

Sarah has achieved many accolades during her diverse career within the RAAF.  She has been involved in various humanitarian aid assist missions as well as military deployments in the C130 Hercules squadron.

She holds a Master’s degree in Systems Engineering (Space Systems) and has been utilising her knowledge teaching government and international guests about space, Australia’s defence space program and systems engineering for a number of years.

Her aircraft was shot at in Iraq, she has trained astronauts, and she is a Flight Commander at RAAF Base Richmond near Sydney, Australia, introducing new roles for the RAAF transport fleet.