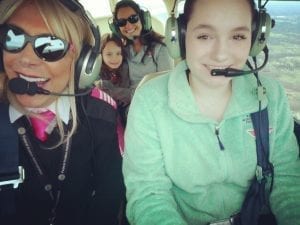 12,408 Girls of All Ages Take Flight for the First Time

Participation in the 8th annual Women Of Aviation Worldwide Week grew by more than 15% year-over-year reaching more than 61,000 in 2018.

The Institute for Women Of Aviation Worldwide (iWOAW) received post-WOAW event reports from 179 organizers in 33 countries and validated 12,408 Fly It Forward® flight reports – reports submitted by women and girls who went on their first flight experience on a small aircraft from March 5 to 11.

Launched to celebrate the Centennial of the world’s first female pilot license earned by Raymonde de Laroche on March 8, 1910, the Fly It Forward® initiative aims to close the startling occupational gender gap in the air and space industry. 108 years after women’s official debut in the industry, the most iconic occupation, airline pilot, remains overwhelmingly male-dominated. Globally, less than 3% of commercial pilots are women.

iWOAW’s annual surveys show that 70-75% of women and girls participating had not even considered aviation as an option despite the prominence of some female role models in popular culture. Following their exposure to the industry’s multiple facets under iWOAW’s outreach guidelines, around 60% of them are looking into a career or hobby in the industry.

As part of iWOAW’s global Challenge, aviation professionals and enthusiasts introduce as many women and girls as possible to the multiple facets of the industry, hands-on. Since its inception, the extensive and comprehensive awareness-building effort has given such personal experience to 256,000 girls of all ages.

Its effectiveness is driving more and more industry stakeholders to help change the face of aviation during the Week and make the fair inclusion of women in its most financially rewarding careers, a priority.

“Empowering women and girls to dream beyond societal bonds is our aim during the Week,” said Mireille Goyer, iWOAW’s President. “So is pressing for progress in the industry. A definite industry culture shift must take place to ensure sustainable gender balance improvement.”

Besides reaching out to the female population on a personal level in women-friendly communities thanks to local gender balance advocates, iWOAW coordinates awareness building and mindset-shifting activities such the Pink Paper Plane Challenge and the WOAW Hunt Challenge to bridge geographical gaps and start the conversation.

Every year, iWOAW distributes Fly It Forward® Awards to the most dedicated communities and individuals based on the reports it receives. iWOAW will publish the name of the winners on the Week’s official website, www.WomenOfAviationWeek.org on March 24, 2018. The winners will receive their awards on May 31, 2018, during iWOAW’s Gender Balance Symposium in Toulouse, France.