She wins. You win. We all win. 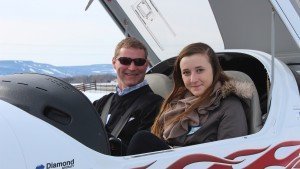 On average, First to Solo™ Challenge winners solo within 6 weeks of their first (free or paid) small aircraft flight experience.

In fact, more than 70% of the Challenge’s participants had not even considered becoming a pilot before noticing an invitation to visit a local aviation facility as part of Women Of Aviation Worldwide Week (www.WomenOfAviationWeek.org), a global aviation awareness week for girls and women of all ages.

Held annually during the week of March 8, the week has already attracted 96,000 to take a good look at aviation. In just 6 years, its impact is registering positively on female start statistics.

The Institute for Women Of Aviation Worldwide (www.iWOAW.org) who founded the initiative and manages the coordination of the Week’s official activities has put numerous incentives in place to motivate participation, including flight training cash for First to Solo™ Challenge winners.

In 2016, any female who experiences a free or paid introductory flight from March 7 to 13 and reports it in the Week’s official website by the March 15 deadline becomes eligible to win an Apple Watch, an iPad mini, etc. and, the flight training cash if she decides to take the next step, learning to fly, without delay.

Women are not the only winners. Flight instructors and pilots also become eligible to win prizes when they report their Week’s activities.

Flight training centers can greatly benefit as well. By simply sharing the Week’s incentives within their community and encouraging women to try flying, they can earn the prestigious iWOAW Verified Women Friendly designation. It features an official seal and a prominent listing in aviation’s only peer-reviewed directory. Designation criteria include a minimum of 10 reported female introductory flights during the week and/or the organization of an official activity.

Women constitute half of the population but less than 3% of the pilot population worldwide. The number of women earning more than 100K a year has tripled in the past 10 years. Women Of Aviation Worldwide Week allows every training center to venture into this huge market without taking any financial risks.

Encouraging your aircraft renters to offer a first flight to girls of any age and/or promoting the Week’s incentives in your community along with your introductory flight offer can pay off not only for your business, but also for the entire industry. The female market is the only market that presents a potential for exponential pilot population growth.