Written by Wendy Rose, Winner of the First to Solo Challenge 2015 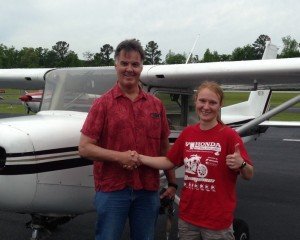 When your kids are little, you help them get dressed, you cut up their food, and squeeze out the toothpaste (oral B everywhere). As they get bigger, they proudly announce “Mom (or Dad), I can do it!”

We as parents have influence on how much our children can accomplish. Kids have big dreams, some are to be a firefighter or a doctor, perhaps a ballerina. Children don’t think probability versus possibility. Anything is possible.

Our daughter Dana has always without another thought reported “I’m gonna be an astronaut.” It’s her dream, and as her parents, our dream is to see it happen, therefore we try to provide best path to her success.

She is a good student, but has to work hard at math. We setup small goals to achieve, it helps with her confidence. 3 years ago, I came across Space Camp in Huntsville Alabama. Right up our alley, well in the neighborhood. Actually 2 states over and 540 miles away.

To earn this week long astronaut training, Dana’s goal was to get A’s on all 4 grade cards. This was going to be a big one. Our little trooper kept on marching, sure kept her eyes on the prize, shed much sweat and many tears, learning fractions (not from me, because I don’t understand ½ of it). It was great reward to watch our child being proud of her accomplishment. “Mom, Dad, I did it! “

The family program at Space camp in July of 2013 was hands on fun, little ones had blast, even the grown-ups, learned a lot. We met astronaut Don Thomas. We learned how challenging it is to be selected for an interview with NASA and even then, you might not get the job. It seems like having a rank as test or air force pilot (and still be alive) is definitely a plus.

Dana asked the question: “I want to be an astronaut but I’m not that good at math. What should I do?“ His answer… “Me neither, I had to work three times as hard as others to get it. If you don’t understand how to solve a problem in the way someone is explaining, go ask different people, and don’t ever give up.”

Researching how to get your kid involved in aviation activities resulted in discovering the Young Eagles. An eaglet she became, got her Dad to drive her around airports, for events and lessons, which kept them both out of trouble, while I was at work.

When my husband was presented the opportunity to move from Ohio to Alabama, it was a no brainer (no, he didn’t have a surgery to remove his brain). Nice folks, great fried chicken, and closer to space stuff. How do y’all say no to that? After moving, we took Dana for the first Orion capsule launch.

Setting back into normal life’s routine, my husband looked up the next Young Eagles event. In further research, he found the Woman Of Aviation Worldwide Week fly-in hosted by FlyQuest in Huntsville and learned about the First to Solo Challenge offered by the Institute for Women Of Aviation Worldwide. He thought I should consider taking on the challenge, I wasn’t sure at first (I wondered if my life insurance has something to do with it).

However, I decided to set my goal on becoming a pilot and fly my little girl high in the sky, to be closer to the stars, until she can get there and higher on her own.

On March 7th, both Dana and I flew. She was on the first flight of the day with Young Eagles, I was on the last one with Grandpa Crow (just kidding). After climbing to what I can now assume safe altitude, the pilot asked me if I wanted to take the controls. I politely suggested that he say his last prayer because I had not done this before. After having a bit of fun, we returned back to the airport, he almost let me land the plane – almost. It would be another 9 days before I got air born again and not for my lack of trying.

I chose Dave Kraft at Shelby County Airport as my primary instructor. He had given a lesson to Dana in early January and brought her back on the ground without injuries or damage to the plane so I decided I could trust him. We scheduled our lessons for next few days, but one of us forgot to put in the good weather request. We’ll blame it on Dave since he’s the instructor.

As aviation folks know, in the USA, one needs a 3rd class medical certificate to solo a plane and become a pilot (except for light sport etc. not my case). I was going to need one of those. Because of uncorrectable vision in my eye, I figured, jumping thru hoops (not for my exercise) would be inevitable.

I scheduled the first appointment I could with the Aviation Medical Examiner. As suspected, the only piece of paper with numbers on it I walked out with was a phone number to check the status of my case and the bill of course. The old chap (the doctor) apologized, he said. “I am sorry but you won’t be the first to solo.”

At the time, I didn’t understand he is referring to the speed at which FAA works. It was in their hands now. Getting home disappointed, I called to check the status of my case. Great news, they received my papers from the examiner! “There will be someone reviewing IT,” the lady said. “How long before IT happens? “ I asked.

The voice on the other end tells me “It depends on the workload, Ma’am.” Naturally I wondered what the workload was in present days. ”As little as one week but no longer than 6 months Ma’am,” she replied. I asked her to repeat that, in case I heard it wrong, because she might have on the eraser while chewing the pencil. Nope she was not choking, I heard right.

When the weather became half decent, the plane had a bad magneto. In addition, I was looking at possibly a long time to get my medical certificate. The chances at wining this challenge were shifting to the other side of the scale. I felt like someone stole my lollipop.

At least, I had a lesson scheduled on Sunday. So was the plan until I got a message from my back up pilot Tom “We need to reschedule.” Ok, next!

By middle of following week, Dave came down with the flu. (Can you believe this guy? He knows I’m on a tight schedule.) However, I got Robert to fill in for Dave. I also learned from my new friends in the Medical Certification Office in Oklahoma that my certificate has been mailed. Sweet!

Boy was I surprised when I got it. I ripped this thing open and got slapped. NOT valid for SOLO, medical flight test only. Why didn’t they tell me last week that I would have to perform a MEDICAL FLIGHT TEST? What a joke right, I barely know, that you don’t need a marble in your shoe, to step on the ball. And they want me to fly a plane? Okie-dokie. I’m buying a parachute.

I had to pick an office to perform the test. No problem, we live in Birmingham so I’ll take the one in Birmingham. “Please contact the Birmingham office upon receiving the authorization letter to schedule your flight test”.

I haven’t once thought about quitting. Although winning the competition was my intention, becoming a pilot was my goal. I kept going, medical or not.

Dave is an exceptional pilot and instructor. He encourages trying to fly different types of aircraft and observing different approaches to the same problem. In 3 weeks, I have flown out of 3 different airports have experienced 4 instructors, and a simulator to help me with crosswind landings (dang it, let’s take it from final).

By the time I received the letter, I had logged about 25 hours of flight time and was pretty confident behind the controls. So I scrapped the parachute idea and called the Birmingham office. I learned that they are going through training for next 2 weeks and would unavailable to perform the test.

Time for plan B, let’s fly to Georgia to get this done. Got it scheduled, got it plotted and planed, than guess what, yup weather! I have learned, not to count on weather, plan C, drive there and rent a plane. One and half hour into my drive, I got the call from plane rental. It turned out I had to have 5 hours with one of their instructor (even with the FAA inspector next to me) to be able to rent from them. No thanks, I’ll just turn around. Back to plan A.

Keep calm and fly on. Following week, I finally met the FAA inspector in person. We did the visual test thing (no chute needed). It was great insight on a check ride. She was satisfied (even greased the landings) and promised to fax the papers over to my old friends in Oklahoma the next morning. She did.

Monday the 27th of April after another constructive lesson, I returned home. While I was catching up with my Dad on the phone, the mail came. Lazily, I walked over to the mailbox. I recognized the envelope. My Dad on the other side of the line and half a world away, was cheering me on “Open it, open it!” Yup got it.

I hung up with my Dad and dialed Dave. “Good news, I got the papers.” He said: “Do you want to come back and solo?” Hum, let’s think this through. “Yes!” I was pretty calm during the entire 26-mile drive.

Dave and I went around the pattern 3 times, stopping at the FBO on the third landing. He gave me few tips on good old Mike and after a few more formalities (that didn’t include prayers and good bye), I was off and taxiing back to runway 34.

The same plane, the same procedures, the same runway. I radioed that my plane was departing from the active runway 34 and remaining in the pattern. I released the brakes, rolled out on the runway, and didn’t even have to think about it. Full power; here we go.

I climbed up. Turning cross wind, I glanced at the empty seat. I clearly recall my cheeks were hurting … from grinning so wide.

My husband wanted me to wait until he got home to tell Dana. That was hard all right. Four agonizing hours pretending like the day was just another uneventful day.

When he got home, he asked me “How was flying?” as he always did. “You know the same old, same old, only soloing for 3 traffic patterns,” I replied. Dana was so so happy and proud.

I hope my journey will inspire her in life. Anything is possible, even if the odds are against you. Don’t ever give up. However, I could not get this far without my super instructor Dave and the support of my family and friends in FlyQuest. Thanks. Also a special thank you goes to the airport staff in KEET!

Soloing a plane for the first time is experience that cannot be explained. It has to be lived and felt. I’m going to keep going. Soloing is just the beginning.