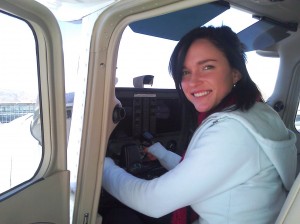 Just one month after she discovered flying at a Women Of Aviation Worldwide Week 2013 event, Lindsay soloed and, in doing so, won the 2013 First to Solo™ Challenge grand prize.

“I’ve always been fascinated with the idea of flight, but never imagined I could actually do it myself,” said Lindsay.

“It just felt really different when you were the Pilot-In-Command and for that moment you were the only one who could land the plane, no one would make any judgment except you. It felt great flying the aircraft alone,” said Liu after her solo flight experience,” said Mak-Chui Liu, Candy, who won the 2014 First to Solo™ Challenge.

Every year, the first woman to solo after discovering flight as part of the Women Of Aviation Worldwide Week celebration wins the First to Solo™ Challenge. In 2015, the grand prize will be $2,495 including $1,500 CAD in flight training and a Sennheiser S1 Digital headset valued at $995 CAD.

In addition, the first woman to solo in Australia will a $1,000 CAD in flight training prize offered by the Australian IWOAW Committee and Airservices Australia.

To be become eligible for the prize, the candidates must go on their first small aircraft flight during Women Of Aviation Worldwide Week (March 2-8, 2015), the pilot or event organizer must report the flight at www.WomenOfAviationWeek.org before the reporting deadline (midnight on March 15, 2015), and the lady must announce her intentions to learn to fly before her first flight lesson.

There is a time when taking a girl for a first small aircraft flight can be far more than just a flight. During Women Of Aviation Worldwide Week, every reported introductory flight makes girls of all ages eligible for a little training cash to get closer to their goal, faster.

Will you give a girl a chance? Will you Fly It Forward®?