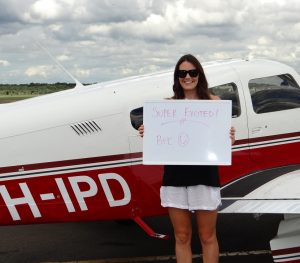 After the major success of Women Of Aviation Week Down under in 2014, Australia is now preparing for the 2015 events across the country.

“The Aussie teams are very excited to be apart of this wonderful initiative and are looking forward to increasing our numbers reached from the 2014 events”, said Tammy Augostin- Australian National President WOAW.

As a part of the Fly It Forward® 2014 challenge,   Australian teams from across 9 states, took over 400 females flying for the first time in a small aircraft and shared their love of everything aviation to over 1400 people who supported the various WOAW events across the country.

Over 120 volunteers, 51 pilots and 45 different aircraft were used during the events which were held across 9 states of Australia.

Royal Australian Air Force also participated during WOAW down under hosting a Flight  Camp for Girls at their East Sale Air Force Base in Victoria.

The camp gave 12 young women from Victoria, New South Wales and South Australia a comprehensive overview of the Air Force and the chance to explore unique and exciting variety of career opportunities.

Deputy Director of Air Force Workforce Diversity, Wing Commander Llani Kennealy, said flight camp was one of a number of initiatives aimed at attracting females into the Air Force.

Globally the Fly It Forward® 2014 initiative reached 26,000+ attendee’s across 96 locations on four continents and over 5,703 females took flight for the first time in a small aircraft during Women of Aviation Worldwide Week.

The Fly It Forward® Challenge held annually during March each year,as part of the Women Of Aviation Worldwide Week celebration offers a fun incentive for aviation enthusiasts to share their passion with girls and women unfamiliar with the industry. More than $12,000 worth of prizes and trophies were available through the various challenges, contests, and drawings.

Changing perceptions and sparking vocations is the goal of the week. The Fly It Forward® Challenge encourages entrants to offer girls and women with no prior connection with the industry, an opportunity to try various aviation activities, hands-on.

In 1915, Marie Marvingt, third woman to earn a pilot license worldwide, flew a bombing mission over a German military base in occupied Metz and became the first woman to fly in combat. She received the Croix de Guerre for her heroic action.

To celebrate the centennial of Marie’s accomplishment, Women Of Aviation Worldwide Week’s theme in 2015 will be: “Serving with honour: 100 years of female pilots in combat”.